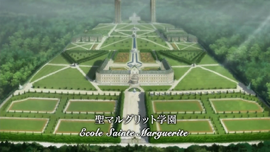 Saint Marguerite Academy (Japanese: 聖マルグリット学園, Sei-Maruguritto Gakuen, French: Ecole Sainte Marguerite) is a boarding school located in Sauville, and is the primary setting for the events in Gosick.

It is founded in the early 16th Century, and is usually visited by the King of Sauville at that period. Among the personal favorites of the king is the botanical gardens he ordered to be constructed at the topmost floor of the school library, where he usually meets his lover; this feature of the library tower still exists 400 years later.

The school was later considered to be the front of Sauville's "Secret Royal Armory", and thus, students who are not citizens of Sauville are not granted access inside the school. It is only more recently that students like Kazuya Kujo and Avril Bradley are allowed to enroll in Saint Marguerite.

The school is composed of a main school complex, where classrooms and other academic facilities are located. As a boarding school, Saint Marguerite also has two boarding houses located within the compound, with separate boarding houses for boys and girls. The school's library is located at the back of the complex alongside the school's clock tower.

There are also notable landscaping features throughout the school, like several hedge mazes and a few topiaries of animals.

Saint Marguerite's library is a very high tower with an immense collection of books occupying the structure. Because of its sheer height, students would rarely approach the upper levels because of the long journey it takes to get to the top, although an operational elevator is also provided. A large botanical garden is located in the topmost floor, where Victorique usually stays to read.

The school's clock tower is a tall structure located adjacent to the library. It is as tall as the library itself, and does not have any windows. It is considered off-limits to the students due to deaths linked to access to the clock tower's topmost level, which is made famous by a movie based on the enigmatic character Leviathan.

Engineers later assess the structural integrity of the building and finds out that the building, aside from suffering from damage over time, is also constructed at an angle and is built to cause discomfort to people who climb the tower. After the discovery of a secret room in the topmost floor, orders have been given to demolish the clock tower.

Retrieved from "https://gosick.fandom.com/wiki/Saint_Marguerite_Academy?oldid=5644"
Community content is available under CC-BY-SA unless otherwise noted.