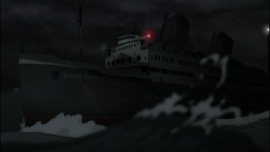 Queen Berry was a luxury liner that sank in the Mediterranean Sea on her maiden voyage on Spring of 1914, resulting in an unknown number of casualties.

Years after the sinking of the Queen Berry, it is revealed that the ship became the stage for a series of bloody murders that dictated the alliances in the First World War, and a similar event ten years later would recreate the fateful sinking of the luxury vessel.

Retrieved from "https://gosick.fandom.com/wiki/Queen_Berry?oldid=6392"
Community content is available under CC-BY-SA unless otherwise noted.