Ian Musgrave is the son of Baron Musgrave. He has learned about Leviathan's capabilities and becomes one of his very few supporters despite his father sharing the opposite ideals. However, due to the alchemist's depression, he eventually falls prey to the alchemist's anger and despair, killed by the same gold that had amazed him.

Ian is a young boy with blond hair and blue eyes. His hair reaches past his ear on the front and goes as far as his nape on the back. His outfit is typical of the upper class boys of his age; he wears a dark green coat, a white undershirt and white breeches, although he doesn't wear a tie or similar accessories.

At first glance, he seems friendly, and he does not exude the air of extravagance of an older member of the upper class.

Despite having a father who strictly criticizes the occult in general, Ian does not share the same personality. In fact, he is curious when it comes to the supernatural, and it only intensified when he met Leviathan, on his father's interrogation of the mysterious alchemist. Ian also appears to be friendly even to strangers, a trait somewhat unusual for someone who comes from an aristocrat family. 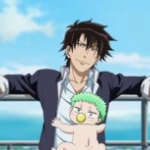